Pasang Lhamu Chuli also goes by three other names: Jasumba, Cho Aui and Nagpai Gosum Peak. The first recorded summit to the peak was in 1986 by a Japanese team from the northern Tibetan side gaining the prominent northwest ridge to the summit. In 2009, a Swiss team consisting of three young mountaineers reached the top of Nagpai Gosum through the southern face, which no one had climbed before. The standard route begins from with trekking from Lukla and via Namche Bazar and passes through the Nagpa La pass. Nagpa La is an important route for the Tibetan refugees fleeing Tibet. The Base Camp lies on Sumna Glacier at an altitude of 5,100 meters. Mount Nagpai Gosum or the Pasang Lhamu Chuli lies in the Cho Oyu massif about six kilometers west of Mount Cho Oyu. In fact, Mount Nagpa Gosum is the highest of three 7000 meterpeaks in the southwestern ridge of Cho Oyu (8201m). The impressive north-face of Nagpa Gosum with its white â€œspiderâ€ can also be seen from the Gyabrag-glacier above Cho Oyu Base Camp.

The Pasang Lhamu Chuli or Nagpa Gosum base camp lies on the Sumna Glacier at an altitude of 5,400 meters.Â  It is one hour from the traditional yak caravan route from Tibet to Namche Bazar over Nagpai La. Advanced Base Camp (ABC) is at 5600 meters at the foot of the west ridge of Nampa La. Two more camps will be set up as we climb higher. Camp I at 6,250m just below the second Col. Camp II at 7,100m on the snow hump. After a few pitches climbing up a steep snow ridge we reach the summit, an ice pyramid with hardly enough space to stand on it. From the summit, savor the astonishingly close view of Everest and other high peaks, then rappel down and get back to basecamp the next day. 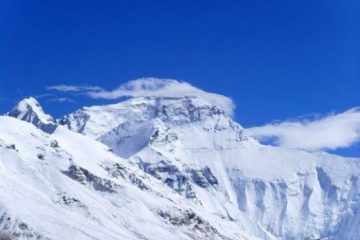